During this difficult time please view our weekly "Message from our Clergy" on our Q-tube, and our Masses and Services if you are unable to attend at:

Also, Please view our weekly bulletin under "Publications" at the top of this page.

We are the people of Mary Queen of the Apostles Parish, in Brook Park, Ohio, dedicated to following the example of our Lord, Jesus Christ, through the Scriptures and Traditions of the Roman Catholic Church. We gather together to celebrate, to share, and to be nourished by the Eucharist. We promote religious education, spiritual growth and moral values by being faithful to the teachings of Jesus Christ. To show our love for God and one another, we live our lives committed to the dignity and salvation of each person, and we live our faith through compassion and service to those in need.

Here's the link to "Q-Tube":
https://www.youtube.com/channel/UC4N7DhiHNNxaPnTKO3py7-g

We have established a regular schedule for video Masses at MQA!!
We will broadcast the 4PM Saturday Vigil Mass, the 9AM Sunday Mass,
and 8AM Monday-Friday Masses.

About an hour after Mass concludes, the video will be uploaded to Q-Tube (our parish's YouTube channel). which you can access directly from our parish website: mqabrookpark.org or at "Q-tube" as shown above.

"Permission to reprint, podcast, and/or stream the music in this service obtained from ONE LICENSE with license A-621009. All rights reserved."

MASSES:
Weekday Masses (Monday-Friday) are at 8AM, Weekend Masses are at 4PM and 5:30PM  on Saturday evening, and Sunday morning at 9AM and 11AM.

THANK YOU for your kindness and generosity in continuing to support the work of your parish through your mail offerings and electronic funds transfers. Everything you all are doing is most appreciated!  If you are interested in our on-line giving, contact our parish office at 216.433.1440 and speak with Trish (x21), Monday-Friday 9AM-1PM.

FEBRUARY OFFERTORY ENVELOPES The envelope company was NOT able to mail out February envelopes due to a supply chain issue. They were able to get March envelopes which were mailed early. Please retain this March packet for next month! They hope to be back on the regular schedule for the April mailing. For the month of February, you can do the following: Use the Feb. 5 and Feb. 12 envelopes which were included in your January packet of envelopes. If you already discarded them, and for the remainder of February, please use your own envelope and include your name, address, and envelope number (if you know it) on the outside. You can use your return address labels. You may elect to contribute for the entire month of February instead of an envelope for each week, whatever is easier for you. Also, the envelope company is supplying us with blank envelopes which you can take from the church vestibule if you want. Special collections for February included Church in Eastern Europe and Black & Indian. If you wish to contribute towards these, please mark your envelope as so. We apologize for the huge mishap on behalf of the company.

OPTIONS FOR GIVING TO THE PARISH

The Catholic Diocese of Cleveland has provided two additional ways for parishioners to give to the parish during this difficult time. As you know we have two ways already. Besides your regular offertory envelopes, there are a number of people who regularly give to the parish through our online giving program, also known as the electronic funds transfer. The funds are transferred directly from your savings/checking account at your bank to the parish. Information and signup for that program can be seen in the bulletin, on our Website (just scroll down this page), or you can contact our parish office at 216.433.1440 x21 and speak with Trish.

The two additional ways are as follows:

First, the diocese has a new link that allows you to make an online donation with a credit card. This is a secure link, which is setup by the Catholic Community Foundation. All monies will be directed to our parish. To make your online donation select our parish name, Mary Queen of the Apostles in Brook Park, from the drop down menu. It is very simple to use. This option can be used on a one-time basis, weekly, monthly, or whatever you want. Your generosity is appreciated now, more than ever. To choose this method of an on-line donation with a credit card, you can Click HERE

Secondly, you may wish to leave the parish in your will. To learn more about how to create a permanent legacy of lasting support for the work of the parish and the Diocese of Cleveland, please contact Mary Lou Ozimek of the Catholic Community Foundation at 216.696.6525, x4070. Thank you!

The Church celebrates World Marriage Sunday on February 12. It’s a day to highlight the beauty of marriage and to honor husbands and wives for their faithfulness and sacrifices. We invite all our married couples to attend the 11AM Mass that day for a special blessing, with a reception immediately following. Info on how to register can be found in a separate article in this bulletin or on our Facebook page. 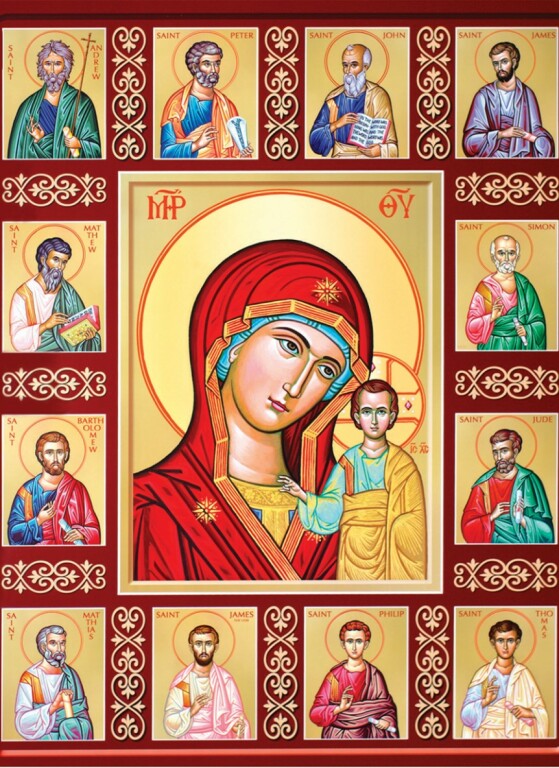 From the Pastor's Desk

I have been reading the essays of G.K. Chesterton, many of which were written in the early 20th century. His wisdom, back then, applies quite fittingly to the world we live in today. This is most evident when we look at the moral problems of our culture and the moral evils that are thrust upon society by the popular media and our government, especially at the national level of the executive and legislative branches. Our country has often been misled by educated and privileged people who are false friends, shallow philosophers, and deceitful guides. There is a fundamental problem of evil that we face. Many people are unaware of what is going on or too busy with other things to become informed or even care. The tempter is always feeling his way, and finding out how much people will accept or tolerate erroneous ways of thinking, speaking, and acting. We see this today especially in terms of human life issues, lack of respect for the dignity of human life, the destruction of the nuclear family, and sexual perversions. In the last few decades this has been happening at a record pace and even more accelerated in the past 2 years. Many in our country now accept things that were not acceptable years ago. The meaning of words and phrases are changed or twisted so that they become devoid of any truthful meaning. Dictionaries are changing the meaning of words like “man” and “woman.” The word “marriage” has been redefined so that people accept sexual unions between two people of the same sex, though the pro-creation of children is not possible between the two. In reality, marriage rests upon a fact of human nature. Human culture is handed down in the family through a husband and wife to their children. Medical operations, even on minors, are referred to as transgender “care,” even though it is cruel, and not at all caring, to mutilate one’s body through unnecessary hormones and genital mutilation of perfectly good body parts. Some states have even passed laws to allow minors to have these procedures done without parental knowledge or consent. They do so in the name of being “compassionate.” Many things today are called something that they are not. When somebody wishes to wage a social war against what normal people have long regarded as a social decency, the very first thing they do is to find some artificial term that makes it sound relatively decent. Pro-life supporters are called anti-abortionists to make their position sound like a negative one (anti), while people who support the destruction of innocent human life in the womb and even at birth are called pro-abortionists or pro-choice to make it sound like they support a worthy cause (pro). In reality, “same-sex marriage” is not a marriage at all; you cannot change your sex since you are born male or female, which is a scientific fact and part of your DNA; the transgender movement is full of lies and is very harmful to people, even in women’s high school and college sports. There seems to be a modern absence of mind throughout the country, even by the highest-ranking officials in our national government. Today’s stupidity, to paraphrase Chesterton, is so stupendous that has never been known in human history before. Young children are being exposed to drag queen shows in schools and public libraries. People have abandoned the use of reason and the natural law, let alone the laws of God. As Catholic Christians we have a right and responsibility to speak out against the dull-witted and moral perversions of our day and age. In history, the fall of the Roman Empire was caused in large part by a fall from within, due to decadent living and complacency. We will continue to see the downfall of our country, the tearing down of the moral fabric of our society, the destruction of our family life, and the loss of God-given freedoms unless we are courageous enough to stand up for the truth and the teachings of God in the Bible and the Sacred Tradition of the Church. We welcome everyone regardless of their sexual orientation, but all of us are called to live chastely in our respective vocations and lives. The good news is that in the end, God always wins!

FORMED.ORG - Picks of the Week:

SAINT JOHN BOSCO: MISSION TO LOVE Flavio Insinna gives a winning performance as John Bosco, the great priest and educator of youth. Beautifully filmed in Italy, this epic movie dramatizes the many challenges that he had to overcome from his childhood all the way to founding his religious order.

A BIBLE STUDY ON THE JOYFUL MYSTERIES: THE PRESENTATION What is the importance of the Presentation of Jesus in the Temple? Join Dr. James Protho and Dr. Ben Akers as they unpack this great mystery and how it can apply to your spiritual life.

DON BOSCO: THE TRUE STORY OF THE APOSTLE OF YOUTH Don Bosco tells the true story of a brave and holy priest whose single-handed battle to save the children of the streets inspired the formation of the Salesians, which is now a worldwide religious order that carries on his work with youth everywhere.

Our parish has a FORMED subscription. To set-up your free account, visit formed.org/signup and select our parish.  There are hundreds of free resources about the Catholic faith.

LENT Consider listening to AM 1260 The Rock Catholic radio as part of your Lenten observances. Turn away from the noise of the world and turn towards the signal of joy & mercy on the airwaves!  Join us for Lenten Devotions, daily Mass, Rosary, apologetics and much more on AM1260 The Rock.  Tuesdays at 3PM we will air the Devotion to the Holy Face of Jesus and Fridays at 3PM Stations of the Cross. The Chaplet of the Divine Mercy will continue to air on Mondays, Wednesdays, and Thursdays at 3PM throughout Lent. Prayers and program guides can be found at https://am1260therock.com or call us at 216.227.1260.